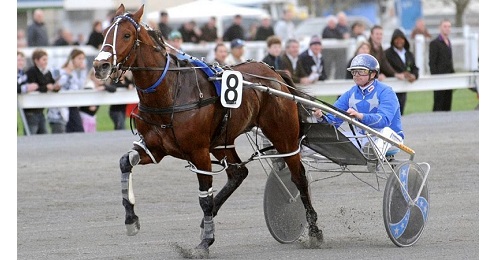 Chasing The Wind, a two-year-old gelding by Fly Like An Eagle, and one of his first crop, was a very impressive winner of the Group 2 $50,000 NSW Breeders Challenge True Blue Final at Menangle at his first start.

Starting from the pole, the gelding settled down behind the leader and appeared to relish the solid tempo with the first three sectionals in 27.7, 29.5 and 28.6. Angled to the outside half-way down the straight, Chasing The Wind gradually pegged the pacesetter with a closing quarter in 27.7 to win by 1.6 metres.

Thirty minutes later Fly Like An Eagle’s talented daughter Dancinginthedark sat parked most of the way before going down narrowly in the Group 2 $50,000 True Blue 2YO Fillies’ Final.

A former NZ 2YO of the Year, Fly Like An Eagle has been represented by two winners and four placegetters from eight starters to date from a foal crop of 36.

Fly Like An Eagle’s Allwood studmate Follow The Stars continues to make an impact with his first racing crop. His two-year-old daughter Star Fromthepalace, who was bred by Allwood Stud and had already won twice, finished runner-up in the Group 3 $30,000 WA Gold Bracelet at Gloucester Park.

Promising three-year-old Back In Twenty, who was bred by Allwood Stud, notched his fifth lifetime success at Pinjarra and has now earned more than $40,000.