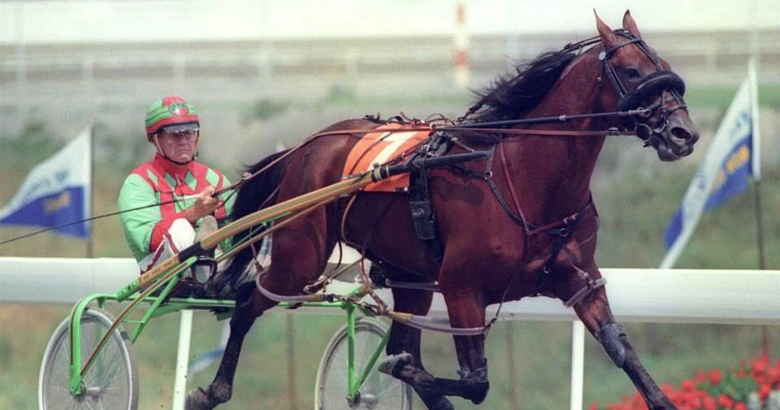 Artsplace was a true champion of the track right from his very first season as a two-year-old back in 1990. Artsplace was able to set multiple world records as a two-year-old pacer. One of them when winning the Breeders Crown in the time of 1:51.1 at Pompano Park in Florida. That win saw him crush the champion Die Laughing and break the previous record by two seconds. So dominant was that performance that it was not equalled until 2007 and only broken in 2008. He won an incredible 11 of 15 starts as a two-year-old and earned $1,180,271 which ultimately led him to be crowned USA 2yo C & G Pacer Of The Year.

It’s true that Artsplace’s three-year-old campaign was marred by injuries, yet he was still able to set a new world record & amass over $900,000 in earnings that season. He won several major stakes races including the Dancer Memorial , American National and finished second in the Meadowlands Pace where he battled it out with Die Laughing and Precious Bunny. Even with all his injury challenges, Artsplace was still able to win 10 of 15 starts as a three-year-old for $972,487 in stakes.

In what is now regarded as a master stroke, Artsplace’s connections decided to push on with his race career as a four-year-old in 1992. A now fully fit and healthy Artsplace had arguably one of the greatest seasons in harness racing history.

The champion entire (by Abercrombie out of the U1 mare Miss Elvira) went through the season undefeated and in doing so, won the Breeders Crown, Canadian Derby, USA Senior Jug, US Pacing Championship, and American National just to name a few. Artsplace retired with a mark of 1:49.2, which at the time was the fastest race mile in the sports history.

At the end of the 1992 season, Artsplace retired as the second richest pacer of all time with earnings of $3,085,083 and a career record of 49 starts for 37-7-1 and set at least one world record in each of his three years of competition. He’ll be forever remembered as a ‘Superstar’ of the sport.

It’s not surprising, given the rarity of the above achievements, that Artsplace continues to have a profound effect on the breeding industry some 28 years later. Artsplace was described by many horsemen as being a perfectly gaited athlete. He is also credited with passing these traits on to his progeny which no doubt has a lot to do with his remarkable success as a sire and a broodmare sire. Like his grandsire Adios, Artsplace has produced champion sons and daughters. As a sire Artsplace’s offspring have total earnings that have now surpassed the $180,000,000 mark (see table below) which has him firmly placed in the all-time top ten. 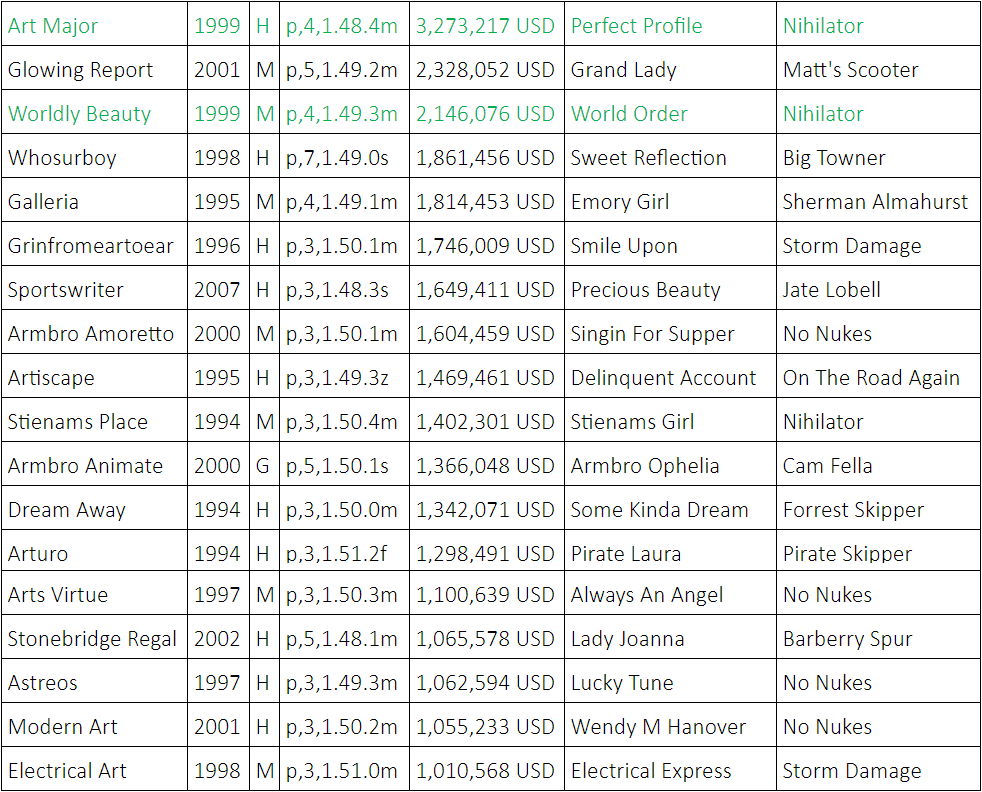 In Australia, sons of Artsplace, such as Art Major, Artiscape and Dream Away are highly active lines across racetracks & breeding paddocks & will be for the foreseeable future. A young grandson of Artsplace (Follow The Stars) is currently 4th on the national 2yo table (see below).

While it’s evident Australia has not had access to the same significantly large numbers of Artsplace broodmares as is seen in North America, we do however have options to breed from stallions who are out of Artsplace mares for the coming 20/21 season. Western Terror was a good example of a successful sire that did stand down here.

We now also see the highest expectations around the progeny of Captaintreacherous (standing for $25k – full book & closed) who is also out of an Artsplace mare. Highly notable as well is ROCK N ROLL WORLD (who has been said to have) “The Golden Cross of the 21st Century” being out of one of the very best Artsplace mares, Worldly Beauty, USA 2yo & 3yo Filly Pacer Of The Year. Worldly Beauty is also a full sister to the dam of Captaintreacherous.

ROCK N ROLL WORLD belongs to the U7- Miss Duvall family, which is noted for the number of extremely successful sires, modern day stars such as American Ideal, Art Major, Captaintreacherous, Real Artist and Western Ideal (ROCK N ROLL WORLD’S grandsire)  just to name a few.  ROCK N ROLL WORLD (known as Rocky) is surely a stallion that breeders who are looking to inject phenomenal genetics (that of Artsplace through his dam) into their mares should be looking at.

What’s also of note, is that all of Captaintreacherous (standing for $25,000 – full book & closed) and ROCK N ROLL WORLD’S ($4,400 less discounts) progeny will have Artsplace in position 10, Nihilator in position 22 and Big Towner in position 46 in their pedigrees, we can’t wait to see what positive effect this will have for both sires progeny going forward.

To assist in the search for finding the sports next Top Ten performers and free pedigree matching for your mares, click on https://www.allwoodstud.com.au/testmating/  .

For all booking enquiries please call Michael on 0410 565 244 or email bookings@allwoodstud.com.au