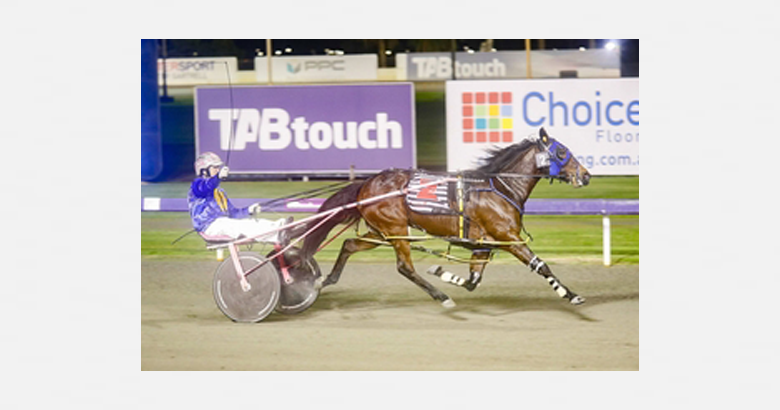 The Follow The Stars filly was far too classy for her rivals in Friday’s $80,000 event with Chris Voak in the sulky, scoring by 4.5m to Just For Love.

It has paved the way for Black Jack Baby to take on the colts and geldings in the showpiece two-year-old event on July 10.

Quadrio said he has already had plenty of requests to put Black Jack Baby in the Golden Slipper against the likes of Lavra Joe, Give Us A Wave and Jett Star after Friday’s win.

“In the Slipper there’s going to be strength, speed and sheer class and ability,” he told TABradio.

“Personally, I think she’s one of the fastest two-year-old’s going around in Perth, if not Australia, over the 400m.

“It’ll come down to speed versus strength.

“If she gets the right draw with a bit of luck and Voaky can do his magic and we’re sitting behind one of them, they’ll know she’s in the race.”

Black Jack Baby has now built an imposing record of seven wins from eight starts and broke through the $100,000 prizemoney barrier on Friday.

She managed to beat colts and geldings in each of her first five wins, including an impressive win over fellow Group 1 winner Talks Up A Storm on June 5.

Quadrio said the filly was already showing signs of having a prosperous career post her two-year-old season.

“It’s amazing because as soon as you take her to the race track she just gets white line fever,” he said.

“With another horse next to her she just wants to do it.

“You don’t have to hit her with the whip, you just have to give her a rein and a bit of a kiss and off she goes.

“She loves being competitive and I’m glad I own her.”

Quadrio has nominated the filly for Friday’s Gold Bracelet at Gloucester Park but is unsure if she will run again before the Golden Slipper.

Jett Star will continue his build up to the Golden Slipper in tomorrow night’s TABtouch Pace, where he has drawn the outside barrier in the eight horse field.

Ryan Warwick drove Jett Star to victory in the Pearl and Give Us A Wave in the Westbred Classic for the colts and geldings.

Following Give Us A Wave’s win on Friday night and Jett Star’s Pearl Classic win, Warwick said the Greg and Skye Bond stable were well placed for the Golden Slipper.

“There isn’t a lot between them,” he said.

“I have a slight leaning to the other horse but I don’t know why.

Four wins for the month