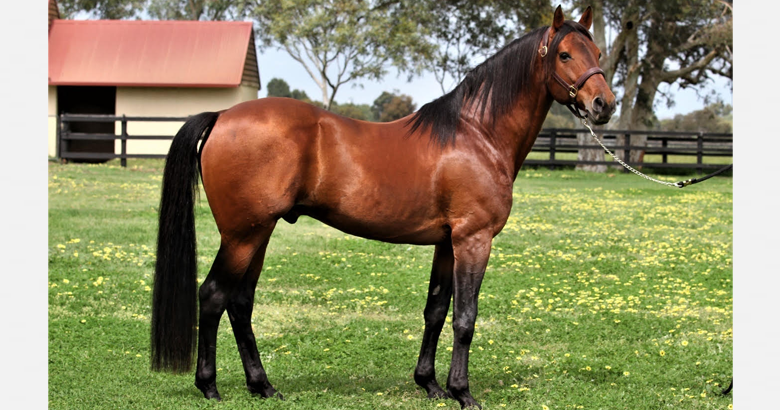 The team at Allwood can’t wait to see Fly Like An Eagle’s current yearlings step out as 2yo’s this coming season as it will be his largest crop yet from arguably his best book of mares as evidenced by his impressive results at the APG Perth back on 1st March this year. His progeny has certainly inherited his powerful & impressive looks as we saw from his top lot by the classy race mare Arkareena which fetched $57,000. Arkareena is by Village Jasper who is not known for producing larger types. Fly Like An Eagle did the job vendors like to see going into the yearling sales.

The Eagle was a great 2yo winning the Group 1 Cardigan Bay and the prestigious Emerald Jewels over the speedster’s mile where he spent half the race three deep before surging to the front and ultimately blitzing NZ’s finest youngsters.

Fly Like An Eagle repeated the dual Group 1 winning feat as a 3yo capturing the NZ Derby at his 3rd run back from a spell beating champion Smolda and Victoria Derby winner Scandalman. He finished his 3yo season winning the Australasian Breeders Crown after coming from the ‘horror’ draw outside of the front row. As per his 2yo win in the Jewels, The Eagle did plenty of work mid race and in the last lap, again surging away leaving a talented field including Soho Tribeca in his wake.

Returning to New Zealand The Eagle showed what a remarkably versatile horse he was winning the Group 3 Methven Cup as an early 4yo over the marathon 3,000 metres. The field included Victoria’s idol Sushi Sushi. He again proved what a great stayer he was in the NZ Cup a year later when only the mightiest of stayers, Terror To Love, was able to just stave him off in the 2013 NZ Cup.

A son of the late, great Mach Three – Direct Scooter line, the line that has the Harness Racing World abuzz, he is also from a Falcon Seelster mare, a cross the late Bob McArdle believed had it all: speed & stamina. Fly Like An Eagle certainly gave credence to that in his racing career.

Follow The Stars 2oth 2yo Winner, From Just 44 Starters