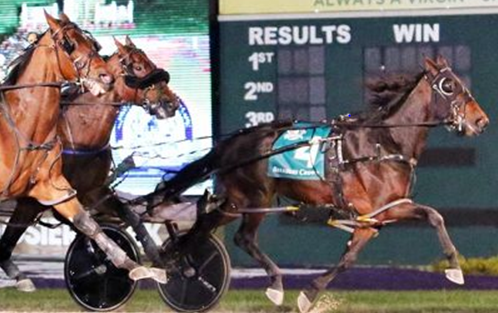 While the Australian family connections of Peaky Sneaky were not surprised, they did get very excited, when she became the first filly to defeat Party Girl Hill and set a stakes record 1:49 mile in capturing the $500,000 Breeders Crown 3Yo filly pace on Saturday night (Oct. 31) at Harrah’s Hoosier Park located in Anderson, Indiana, USA.
Peaky Sneaky had too much in the tank for the previously undefeated Party Girl Hill in the Breeders Crown for 3-year-old pacing fillies.
These two impressive fillies had a real crack down the home straight and while Party Girl Hill showed a real fighting spirit, in the end Peaky Sneaky wore her down in the closing strides to prevail in a stakes record 1:49 mile at Harrah’s Hoosier Park
“She was tremendous last week,” Gingras (driver) said of Peaky Sneaky. “I thought she had a shot.”
Nancy Takter (trainer) has believed in Peaky Sneaky for some time and said: “She was so good. I’ve been saying all along that she’s going to win a big one. She won the right big one.”
Peaky Sneaky (a $100,000 yearling) is owned by Howard and Judith Taylor and Order By Stable, and was bred by White Birch Farm. The victory was her sixth and most impressive so far this season.
Also of note, is the breeding of this talented young filly. She is out of Rocknroll Hanover’s half sister and to the dams of Captaintreacherous and Victoria’s new star acquisition of Rock N Roll World, who is also by Rocknroll Hanover. Other family close U7 family members are:
Art Major p,4,1.48.4m 3,273,217 USD
Captaintreacherous p,3,1.47.1m 3,153,541 USD
Worldly Beauty p,4,1.49.3m 2,146,076 USD
Theredandpanlines p,8,1.49.2m 944,349 USD
Wake Up Peter p,4,1.48.3m 906,980 USD
Rock N Roll World p,5,1.48.3f 845,659 USD
ROCK N ROLL WORLD is a son of the champion race mare (above 2nd in the table) and USA 2YO and 3YO Filly of the Year Worldly Beauty 1:49.6
ROCK N ROLL WORLD p.4 1:48.6 displayed brilliant speed and stamina of his own, winning on half-mile, five- eighths and mile tracks in Stakes and Invitational company from two to five years.
As a two-year-old, ROCK N ROLL WORLD won a division of the Tompkins-Geer Stake and finished second in the Sheppard Memorial and Reynolds Memorial.
In all, ROCK N ROLL WORLD won 18 races with 27 placings.
A bay horse, foaled in 2012, 15.2 hands and a stunning individual (like his close relation Captaintreacherous) , ROCK N ROLL WORLD represents GREAT value for broodmare owners and now that he is Standing at Goulburn Valley Equine (Victoria), the future of this branch of the U7 Family looks very bright in both hemispheres.